Cast your cares away on this tropical island that has warm waters all year around! Every night at Sunset, a Pageant Competition takes place for you to represent your home realm & bring home the grand prize!

Sunset Island is one of the realms of Royale High, released on July 17th, 2019. It is accessible from the boats docked by the ocean in Earth (and previously in Divinia), and can be teleported to on the map.

Players that joined on the first day of Sunset Island's release received the "Sunset Island: Here From Day 1" badge.

Unlike other realms (except the Trading Hub), in Sunset Island you cannot fly.

Sunset Island has three chests that can be found. Two of them reward accessories, while the other rewards 250 diamonds. The chests can be found in a tent, in the ocean, and in the pier. 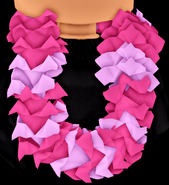 Flower Lei, obtainable from the chest on the boat dock 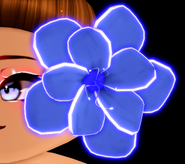 Tropical Hair Flower, obtainable from the chest in the ocean

Diamonds, appearing as various colors of seashells, spawn underwater in the ocean surrounding the island or on the beaches nearby. A list of base amounts can be seen in a hidden cave. There is a list that most people keep. Based on the color of the shell is how many diamonds the player will get from it.

The Royale Universe Pageant is an event that occurs on the island.

To enter the pageant, players must sign up on the board near the docks. When a player clicks on the board, their player will automatically walk up to it and, with a color-changing pen in their left hand, write their username on the board in a random color and random font. Firstly, the player either will be prompted to select Miss, Mr., or Mx. first, then the player can select or enter a Realm name to represent. Before this, there were only two options: Mr. and Miss., which makes it difficult for gender-neutral players to choose one. It was then updated on Mar 3, 2021.

There will be a randomly chosen theme, and the players are given 10 minutes to make an outfit that matches the theme. A list of themes that can occur can be viewed here.

After the dressing time expires, participants are teleported to the stage, and three randomly chosen players are given 30 seconds to answer the questions asked by Adam, the host. For the list of questions, visit this page.

After the question portion of the pageant, players will be teleported backstage behind the runway, where they will then take turns strutting down the catwalk. The order in which the players will walk and be positioned during voting is determined by the placement of their name on the sign-up board.

Everyone in the server (even non-participants) has to participate in voting, where they give roses to the player they vote for (the more roses one receives, the higher the chance of winning) within a time limit of 35 seconds. Each player has 3 roses to give away to a participant, and they cannot vote for themselves.

The Pool Smoothie Bar is an interactive food activity for players to mix their own drinks. There are two stations with two blenders each, meaning up to 4 players can make a smoothie at a time.

At one of these stations, players can click on the "Make a Smoothie" button at the bottom of a blender. This triggers a Smoothie Menu GUI to pop up on the player's screen. Players can then click the "Make!" button underneath the smoothie flavor of their choice, which brings up a notepad with the recipe on the left-hand side of the player's screen.

Players must follow the recipe in order to make their smoothie. The mechanics are similar to baking, but with interactable fruit dispensers.

Once the players have created their smoothie, they can drag a circle in the center of their screen to either the left or the right; dragging left pours the smoothie into a glass, while dragging right pours into a coconut.

Underneath between the two sets of smoothie stations, there are refrigerators that can be opened to take other free food items, including frozen grapes, watermelon, and a selection of ice pops.