Along with the accessories, two brand new pairs of shoes were introduced that were made by Lizzy_Winkle.

Every so often, rain would begin to fall in Divinia. When it stopped, a rainbow would appear in the sky. Players could fly over to the rainbow; located at one of the ends of the rainbow were clouds, a pot of gold, and many diamonds in the shape of coins for the player to collect. The rainbow only appeared for a few minutes after the rain stopped, then it would disappear and reset. Very rarely, a lucky clover orb would appear here. When walking over it, the player was gifted a random free St. Patrick's Day accessory from the shop.

The time required for the rainbow to appear was approximately 6 minutes. 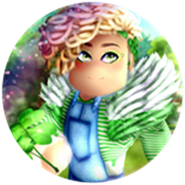