ReddieTheTeddy is a modeler for Royale High. Her most notable contributions to the game are some of the hairs, sets such as Spring Cherry Blossom, and other various accessories.

If a player meets Reddie in game, they will receive the "You Met Royale Developer ReddieTheTeddy!" badge that reads:

"THE MERMAID QWEEN OF MESHES! Teddy AKA Meg is so innovative and creative, sweet, driven, and makes KILLER HAIRSTYLES!!! She's constantly pushing the limits of ROBLOX and RH, and is the founder of new systems, like Hairstyles including their own Accessories. Everything she makes is straight out of a magical fairytale land! https://twitter.com/reddietheteddy https://www.twitch.tv/reddietheteddyy "

ReddieTheTeddy has appeared as a NPC in game on some occasions. 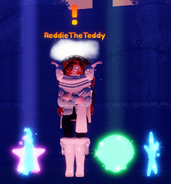