New Years
The New Years 2020 event began on December 31, 2019 and ended on January 3. This occurred in the player's apartment. 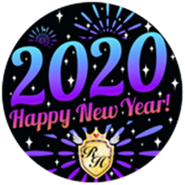 The apartments received changes for the event. The living room/kitchen and bedroom was decorated with confetti as well as balloons that vary depending on the color that the player chose for their apartment. Outside the apartment, fireworks were added (which required the Roblox graphics quality setting to be set to 3 at minimum in order to see). In addition, fireworks were also added to Sunset Island.

In the apartments the small bed area in the window was removed and replaced with a chocolate cake that had a "2020" sign on top, the cake's icing color changed depending on the player's selected apartment color. The freezer in the kitchen also gained functionality, by clicking on the freezer you could gain access to an ice cream dessert, this also changed color based on the player's apartment color. Both of these items could be placed down and consumed.

Located on the couch in the living room, this game could be clicked every 30 seconds to give every player in the apartment a question that allowed them to reflect on their year.

The default Christmas songs in Royella were replaced. They were replaced by a new playlist fitting the theme of "Spectacular Fireworks". The songs in the New Years default playlist are: