These are minor events that occurred in Royale High correlating to some event or season.

This does NOT include events included in other events, such as the Lunar New Year 2021 event being bundled with the Valentines 2021 event.

Launcelot was given birthday hat & sash accessories during the event exclusive to him only, but the accessory no longer exists.[1]

July 3, 2020 - July 9, 2020
From July 3, 2020 to July 9, 2020, the Beach House realm was updated to include decoration and theming for Independence Day. The house was recolored to red, white, and blue. A dock was added outside the house including a Ferris wheel. During the night, a fireworks show would occur. A sparkler tool was added to the realm. All players that joined during this time received the "Royale Independence 2020!" badge, and the American Flag and Canadian Flag accessories.

July 4, 2021 - July 6, 2021
On the release of the new Diamond Beach, it was used for a minor Independence Day update. The realm's buildings were decorated with American flag decorations. The American Flag and Canadian Flag accessories were re-released in chests found on the beach. At the realm server's in-game time of 6PM, a fireworks show would occur during the night. A temporary sparkler tool was added to the realm.

The 4th of July fireworks show on Diamond Beach. 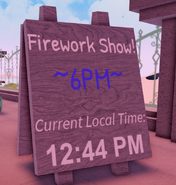 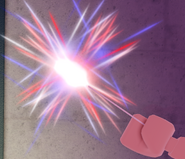 The celebration sparkler tool given during the event. 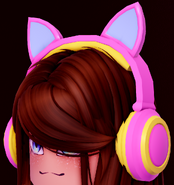