Kateka22 is a writer for Royale High, having written the early fountain stories, and NPC dialogue. She was the developer and creator of Wizard Adventures based on the Harry Potter book series.

If the player meets KateKa22 in game, they will receive the "You met Royale Developer Kateka22" badge that reads:

"You just met Kateka, the Royal-est of writers! She's the text behind the mysterious halo-giving fountain, the one who gives a voice to the handsome butlers, and even behind the door of the grumpy figure's house. She also adds tons of the amazing outfits you see in the game today! She builds her own game and is president of the Wizard Adventures Club. If you spot her flying around RH with her kitty Momo, you might be in one of her YT videos! https://www.youtube.com/evilkategaming"

Kateka22 has appeared as a NPC in game on some occasions. 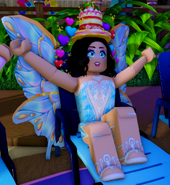 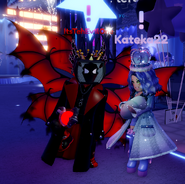