New items were released, along with items from previous years going back on sale.

The Pillowcase Candy Bag 2021 was obtainable from a chest in the middle of the neighborhood in Wickery Cliffs.

All previous candy store items from previous years returned, along with 18 new items:

The Halloween Halo 2021 was released with the update as a rare possible reward from the new Halloween fountain stories.

The fountain stories were gathered from the Halloween 2021 Fountain Story Contest held by Kateka22 on Twitter.

Wickery Cliffs is an autumn-themed town that has been decorated for Halloween.

The town center contains a fountain, a train station, apple bobbing stations, Gemma's Candy Swap, and some buildings. Some chests are hidden in this area. There are also places where the player can rest, which are the leaf piles scattered around.

The neighborhood has many houses that can be trick-or-treated at, along with some roleplay activities in the center and a chest.

Beyond the neighborhood of Wickery Cliffs is a long path that leads to a haunted mansion called “Blackwood Manor”. Here you can hunt ghosts with friends as a way to get candies. This is part of the “part 2” of the Halloween update, meaning at first release it was temporarily inaccessible.

Players can go up to houses and ring the doorbells to receive 1 to 10 candies. Every house can be rang every 2 minutes (120 seconds), and the same house cannot be rang twice in a row.

There is also a low unavoidable chance for a "jumpscare" monster to appear instead and give no candy. The monster will then chase the player for approximately 5 seconds, killing the player if it touches them. The jumpscare monsters can be outran by sprinting or flying away until it despawns. Some of the jumpscare monsters include a doll holding a knife, a squid like monster, a vampire, a ghost, a spider, and the creepy twins from The Shining. If the player survives the monster, they are able to knock on the door of the house again and get candy.

Around the spawn area are stands to bob for apples. There is a small chance when interacted that the player will successfully get an apple, rewarding 10 candies. If the player doesn't get an apple, the game will automatically keep bobbing until an apple is received.

Gemma has a stand near the train station where candy can be exchanged for diamonds. The exchange rate is one candy for three diamonds.

At the end of the hill, players can enter Blackwood Manor, a haunted mansion to hunt ghosts. In the first room, players can grab a ghost gun, night vision goggles, headlamps, and can refill ammo and empty the vacuum. In the second room, players can shoot ghosts to trap them and then stay near them to vacuum them to gain candy. Players can get candy from capturing ghosts or shooting them, and can get teammate bonuses when they assist teammates. 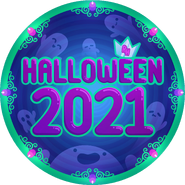 The middle of the neighborhood with the chest containing the candy bag. 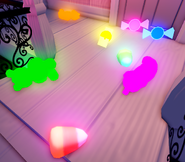 Candy on the ground after trick-or-treating
Community content is available under CC-BY-SA unless otherwise noted.
Advertisement