Autumn Town returned from the 2019 Halloween event, with a modified maze and chest rewards. A new set released, and some items were reworked.

The Cauldron Candy Bag 2020 was given to players for free for joining the game during the event.

The following Halloween accessories from previous years were reworked with the update:

The Shadow Empress Chained Boots also gained a toggle function with the update.

A new set also exclusive to the month of October, Royale Rebel, released with the update. It was created by ixchoco and ReddieTheTeddy.

Items from the 2018 Halloween event returned once again for Candy, along with the Magical Broomstick.

Autumn Town returned from 2019 with minor changes. Chests were added in the map that rewarded some of the homestore candy hunt items from the 2019 Halloween event. Opening any accessory chest also encourages the player to support the designer of the clothing store the accessory came from in 2019.

This table does NOT include chests that are inside the maze.
This may not have all the accessories available - this is still a work in progress.

A new maze was released for the update, replacing the maze of the prior year.

The layout is nearly the same as Halloween 2019's maze, with some changes. Decorations were added in the maze. A lever toggle mechanic was introduced, requiring two levers are found elsewhere in the maze and toggled before the finish area can be reached. The levers are both on the bottom level.

Chests are in random places in the maze, that reward 500 diamonds or the following accessories:

Finishing the maze rewards the Nightmare Witch Hat (also an accessory from the 2019 event), 5,000 diamonds, and the "Beat Extremely Hard Maze RH 2020!" badge.

Join window when joining Autumn Town for the first time 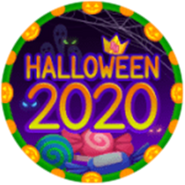 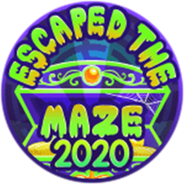