The fountain (also known as the Fountain of Dreams or Dream Fountain) is an interactive object consistently located in Divinia Park and sometimes also appearing in other realms. It can be wished on every two hours to complete a story to possibly win a reward (most notably the highly rare halos), lose diamonds, or for nothing to happen at all.

It was originally introduced on Earth from September 13, 2018 to February 1, 2019. It was then replaced with the Divinia Fountain of Dreams when Divinia replaced Earth. Then on August 31, 2019, Earth returned and the Fountain of Dreams had changed back to its past design. When Divinia Park was released on February 17, 2020, the fountain was moved there, with a design. A fountain is also available in Diamond Beach. Fountains are also sometimes available in seasonal or event realms, such as the ones in Christmas Town, Autumn Town, or Wickery Cliffs.

The fountain will greet the player, then ask the player if they would like to make a wish or walk away. By making a wish the player will continue the story. However, if they walk away, this does not reset their fountain timer. Once the player clicks "Make a Wish" the screen turns to black, returns back to normal and the player appears to be doing a "Throwing diamonds" animation, although the player does not actually throw in any diamonds. After the player "throws their diamonds", the sidebar closes. A randomized story prompt is given to the player. After this, the fountain will propose a set of four choices, A, B, C, or D. After a choice is made, a final close to the story is given, which will relate to the reward they are given (if any). The player can win diamonds, lose diamonds, nothing, win a random amount of XP or very rarely a halo.

The possible rewards vary per option chosen; for example, option A for a certain story may only have a chance to either reward diamonds or give the player nothing, while option B can reward diamonds, take away diamonds, or give the player nothing. One or more of the options may include an extremely rare halo reward. Choosing an option that has the possibility to result in a halo does not guarantee the halo reward.

The cooldown timer for the fountain is two hours. This cooldown timer starts once the player makes a wish. If the player leaves the game or resets after making a wish but does not complete the story prompt, they will get nothing and the cooldown will not reset.

When the fountain is advanced, a fantasy scenario involving their character is displayed. These stories sometimes include mentions of NPCs or even other players, such as the developers or notable users in the Royale High community. These stories are often related to the season or holiday relevant at the time, typically in line with the current halo reward available. When a new halo is made available, new stories are typically made for them.

Prior to October 12, 2019, the fountain functioned differently. Interacting with the fountain would immediately start a story. Halfway into the story, the player will be asked to throw in diamonds. A player could have thrown in 5, 10, 25, 50, 100, or 200 diamonds. After throwing in diamonds, the story concludes, with the chance of doubling, tripling or even quadrupling the amount of diamonds they had thrown in. There is also a possibility of the player losing their diamonds, and a very small chance of winning a halo. Unlike the current system, there were absolutely no specific conditions as to obtaining a halo; players did not need to reset for a certain story, nor do they need to use a certain amount of diamonds.

Originally, the fountain stories could be reset without inciting the cooldown by resetting and going back to the fountain, or leaving the game and rejoining. This was later changed to lock in the story once the fountain was prompted, until diamonds were thrown in and the cooldown passing.

The original fountain on Earth had a cool-down period of 3 hours, which was then changed to 2 hours shortly after its initial release. It remained the same until February 1st, 2019 when Divinia was introduced. In this update, the fountain's cool-down period was changed back to 3 hours.

The reason for this original functionality being retired is not clear, but a large possibility is due to that its functionality could be considered gambling with the possibility to lose diamonds after putting in diamonds, which is against Roblox's developer guidelines and terms of service as diamonds can be purchased with Robux. 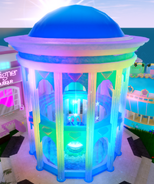 The Fountain of Dreams in Divinia

Close-up of The Fountain of Dreams in Divinia 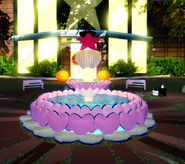 Fountain in Earth during Halloween 2019

Fountain in Autumn Town during Halloween 2020

Fountain in Divinia Park during February 2021 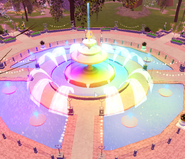 Fountain in Divinia Park during March 2021 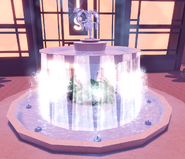 Fountain in Wickery Cliffs (for Halloween 2021)
Community content is available under CC-BY-SA unless otherwise noted.
Advertisement