Easter
The Easter event in 2020 involved updates to Moonlight Square and Divinia Park along with new accessories.

During the event, Royale High was also part of Roblox Egg Hunt 2020. Documentation about the Roblox egg quest in Royale High can be found at Eggchanted.

New Easter accessories were added obtainable from the Easter Park at Moonlight Square by rescuing bunnies.

The realm replaced the St. Patrick's theme with an Easter theme instead. In the center, there will be a hut with an NPC bunny named Sir Charles inside. Although optional, players can choose to talk with him. Sir Charles will request the player to look for his chocolate bunnies and talk more about the event.

There is a trail of chocolate footprints that leads to a tunnel. Players who pass the tunnel will be welcomed to a bunny village filled with houses and smaller huts. Chocolate bunnies will spawn in a random hut one at a time and players can collect them when they do. Their rescues can be used as currency for an Easter shop that can only be bought from in Moonlight Square, although it can be viewed in other realms.

The number of huts increased substantially after the main update was released. Due to the feedback and bugs the change created, the number decreased slightly.

Easter decorations and animated bunny NPCs were added to Divinia Park on April 12, 2020. The bunnies cannot be interacted with, though they will occasionally stop hopping around the fountain area for short periods of time. 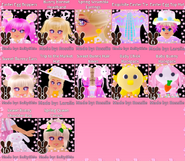 Example of the hut the bunny spawns in. 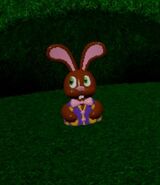 Chocolate bunny that spawns in the hut 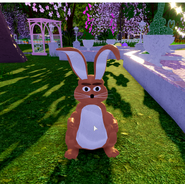