Take a stroll with your parasol through Divinia Park, where you can make a wish at the Fountain of Dreams, use the city's stage and recreational center, or go for a swim in the endless clear streams!

Not to be confused with Divinia.

Divinia Park is a realm added to Royale High on February 17, 2020. It can be accessed through the teleportation scepter or by walking into the cutout within Earth. The Fountain has been moved to Divinia Park and no longer can be accessed from Earth.

Divinia Park is a large map with various pathways, lots of trees, lots of flower bushes, among many other things spread across the map.

Located near spawn, players access the Fountain and can "Wish at the fountain". There is a chance to either gain or lose diamonds, win nothing, gain EXP, or very rarely receive a halo. Every two hours, after the player makes a wish, they can try again.

Nearby the Fountain, players can find the Docks of Divinia. It was originally a small platform with one boat, which never moved around, though also got updated during the Valentines 2021 event.

In one section of the map, players can find a house. Originally it was completely empty inside with various fire pits and s'more stands outside, though it was updated alongside other locations during the Valentines 2021 event.

In another section of the map, players can find a stage and an area to view it. The stage was originally empty and there were a bunch of tables to buy food from. Alongside with some other parts of the map, the stage area was updated to feature a violin concert every 6 minutes, though most of the tables were removed.

There are a total of 13 chests that can be found within the realm. Each adds up to 5,750 diamonds in total.

Divinia Park also had a flash raining event as part of the St. Patrick's 2020 update. When the rain had stopped, a rainbow would appear, and players could fly to a small cloud located underneath the rainbow. On the clouds were coins (one coin is equivalent to one diamond, unless the player had a multiplier gamepass) and "Magical Clovers". Inside the clovers, players can win purchasable and non-purchasable Saint Patrick's Day accessories.

During the Easter update, various eggs were hidden around the Fountain and bunnies would be hopping around the map with bunny name tags. There was an Easter Farm filled with carrots spread throughout. Players could also shove or jump on the bunnies, sometimes glitching them out.

During the Valentines 2021 update, Divinia Park was changed from the 2020 Easter to a night-time park to celebrate Valentines, Black History Month, and Lunar New Year. Players can travel around the map by clicking the map icon on the left side of their screen, which shows some of the main areas that were updated.

During the St. Patrick's 2021 update, Divinia Park was changed to a day-time sky. Some of the event areas around the Fountain have been made empty, such as the area for Lunar New Year and the Black History Month Gallery. Approximately 5–30 minutes, the rain event would occur similarly to the St. Patrick's Day Event from 2019 and 2020.

During the April Fool's update, Divinia Park was changed to a night sky and feature many jokes. Some of the changes included all water to be yellow to be "lemonade", various signs such as "is the plural of moose meese" or appreciation messages to a few developers, patches of purple grass, and many more. By the Docks of Divinia, a large tower called the "Tower of Royhell" was added as a reference to the well-known game, Tower of Hell.

During the Easter 2021 update, Divinia Park was updated. It included a similar day scene to the St. Patrick's 2021 update, butterflies flying around the fountain, and a space for the Egg Hunt Minigame. If the player enters the Minigame area, the park sky changes to a night theme, similar to the Valentines 2021 Divinia Park. And also in the realm, the red-tinted cherry blossoms turned to orange-tinted ones.

During the Valentines 2022 update, Divinia Park was updated. It returned back the night scheme from the Valentines 2021 update, the lunar new year ornaments are now a lot more responding into the realm and the food from the butlers, were replaced with traditional Lunar New Year dishes. The realm also returned the orange tinted blossoms to be pink tinted from the Valentines 2021 update. A new chest location, which included the Lunar New Year: Tiger item was released, which included the animated Lunar New Year Tiger tail. A new witch cave, from some of the lakes of Divinia Park has been included, which was here to roleplay as witches or any other ideas.

During the Easter 2022 event, Divina Park was updated again and it was similar to the Easter 2021 event. You can play the egg hunt minigame in the minigame area. 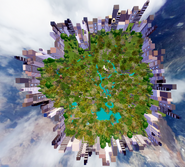 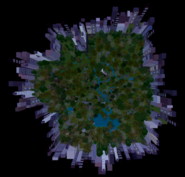 This section is a trivia section. Please relocate any relevant information into other sections of the article.