6 new themed wings were introduced for the event, along with the previous year's festive wings. 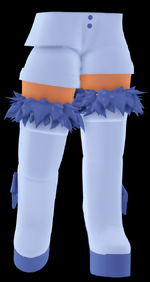 On December 7, 2018, the Ice Glam vanity was added to the shop. It costs 25,000 diamonds and its design features many icicles and snowflakes. There is a limited edition hair dryer, hairbrush, and makeup brush that comes with the vanity. They are blue in color and have a snowflake design on them.

Although this was said to be limited it is onsale all year round.

The Winter Crystal Halo 2018 was introduced for the winter months.

The Fountain also recieved a winter makeover and was completely frozen over.

Inside the log cabin on Earth, there were a stack of trays where players could decorate and add cookies. This included customizing the type of cookie, the color of the icing, and the image that was on them. Once completed, the cookie was placed on the display with the players username hovering above the cookie, and was left for Santa.

After some time, the player could hear jingle bells and see Santa and his reindeer flying onto the log cabin roof, an NPC Santa would drop down from the chimney, eat the cookies, and add presents around the room for players to open. Players could only open one present per Santa visit on the server. The player would have to walk on top of a present to receive it, and a pop-up would show on their screen, listing the item they had received.

The new accessories added to Santa's gifts in 2019.

Retrieved from "https://royale-high.fandom.com/wiki/Christmas/2018?oldid=36151"
Community content is available under CC-BY-SA unless otherwise noted.