For other pages with similar titles, see Callmehbob (disambiguation).

Callmehbob is the lead developer, and creator of Royale High, and all other related games (i.e Enchantix High).

If a player meets Callmehbob in game, they will receive the "You Met The Creator!" badge that reads:

You met the creator of Royale High, Fantasia Getaway Resorts, Autumn Town, and Enchantix High, callmehbob! She is the brains behind the design and builds the games. niceuuuu!

She owns the channel Aura Frost which was created on May 20th, 2014. It was once used to post videos of her sneak peeks of Royale High, although in the earlier days of the channel she posted streaming guides. As of the time of writing, her latest video is "Baking Class + New Campus Sneak Peek 👑Royale High School ROBLOX 👑", which was published on April 30, 2018. She is currently inactive on YouTube.

callmehbob has a toy made in the likeness of her Roblox avatar. It is a poseable figure and can be obtained in the "Celebrity Series 2 Mystery Boxes". It also contains a code that allows players to obtain the "Callmehostentatiouslyslyempressed" avatar accessory on Roblox. By owning this accessory by redeeming the code, players can also gain an in-game accessory, the Callmehbob Diamond Ring, after joining the game.

Callmehbob has appeared as a NPC in game on some occasions. 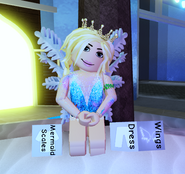 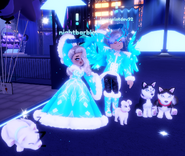