April Fool's
The April Fool's Day 2021 Event started on April 1st to April 5th inside Divinia Park. The game's name was temporarily changed to "Tower of Royhell" as a reference to the Tower of Hell, and a thumbnail was added and the game's icon was changed to Vioncii falling inside the tower. Divinia Park was changed to feature various community inside jokes and prank accessories. Originally it was supposed to disappear late April 4th to make way for the Easter 2021 update, though was constantly reverted back to the April Fool's update while Ice7 and Calinpj04 were busy fixing the multiple bugs in the Egg Hunt Minigame for the Easter update.

Two new accessory items were added, obtainable from chests at the top of the Tower of Royhell.

Divinia Park was updated with several jokes. Upon entry, a GUI would pop up showing the ROBLOX Woman Face and the word "ok.", with an "X" popping up eventually to click out of it.

On the left side of the player's screen, there was the sidebar from the New Years 2021 event, showing the player currently doing Vioncii's bag quest. Instead of 35 bags, it shows "0/500,000" and a bottom bar saying "NO quitting." This was to indicate how the bag quest was hard to complete, along with the park being decorated with the Midnight's Strike Popstar Platform Heels, which was the reward for completing the New Years 2021 bag quest.

The park's lakes, rivers, and fountain had been replaced with "lemonade" instead of water. In the fountain, there was bold red text saying "make a wish. DO IT." and smaller black text saying, "Its lemonade. I promise".

In and around the tower, flying was disabled to prevent cheating in it.

The Symphony, which was added to Divinia Park at Valentines Day 2021, was changed to bass boosted music.

In the sky, there is the Woman Face replacing the moon, as well as the phrase "GET NOOB". The sky is constantly dark and seems to glow a little purple onto terrain, despite (the terrain) being purple itself.

In some flower beds and trees, parts of the flowers or leaves were change to Woman Faces. In a certain area near the Tower of Royhell, there are multiple copies of Gurt aligned in a circle. Under a tree near the spawn bridge was Vioncii and JamJooJoo's characters with small heads. Vioncii was crying tears as his character was during the New Years 2021 event.

A large tower in the lake by the Docks of Divinia was added during the update. It consisted of an obstacle course in a similar manner to the Tower of Hell. Some of the stages consists of jokes and poking at some of the past events, such as the Christmas 2020 and New Years 2021 events. Completing the obstacle course and reaching to the top, players can obtain the Oof Head and Worm Corset. The chest for the Oof Head was close to the spot where the player gets to when reaching the top, while the Worm Corset was on the other side of the tower. 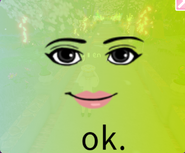 Message upon joining the game.

Pathway to the Fountain of Dreams

The Fountain of Dreams

Tower of Royhell from a distance

When looking up inside the tower
Community content is available under CC-BY-SA unless otherwise noted.
Advertisement